The exhibition comprises thirty six pieces from the private collection of Mr. & Mrs. Herbert Lobl, amassed over sixty years, predominantly buying from London dealer Louis Joseph and also from Bluett, William Clayton and Marchant. He also bought at Sotheby’s & Christie’s. The catalogue is produced chronologically and where possible Marchant have published the provenance.

Herbert Lobl was born in Germany in 1923 and moved to London in April 1939, just before the outbreak of World War II. After the war he worked at an uncle’s shoe factory in Bridgend, Wales, which eventually became one of the major suppliers to Marks & Spencer. Returning to London on weekends, he would frequent the antique galleries of Knightsbridge. It was here, at 28 Knightsbridge that he became great friends with Louis Joseph. On the third or fourth visit to his gallery, in 1959, Mr Lobl asked the price of a jade flower bowl (no. 29). Paying by instalments, he insisted on only collecting the piece once he had completed payment. This was the beginning of his fascination with jade, one of the world’s hardest natural materials. He enjoyed learning about the history of the carving and the working of the stone.

The exhibition cover piece, a nine dragon brush washer (no. 23) is an exemplary piece of jade carving. It is intricate and sophisticated with varied sized dragons writhing and curling through high-relief clouds in pursuit of flaming pearls, above swirling waves. It comes from the collection of Sir Desmond Cochrane, Bt. and was purchased in London in 1976. The inspiration for this piece is certainly drawn from the massive Yuan dynasty jade wine vessel at the Round Fort in Beijing.

Another piece, elegant in its simplicity, is the curved pear-shaped ewer (no. 28) with scroll handle and slightly recessed base. The attractive stone has not been overworked or overdesigned in appreciation of the material. The scroll handle indicated use for water or wine and the shape would have probably been inspired by leather water vessels used on the silk road and depicted in Tang dynasty pottery.

The catalogue back cover piece, (no. 25) is again exceptional. Carved as a ribbon-tied treasure pouch, it is well-hollowed on the interior, while the exterior has two detailed dragons with intricate scales. The reverse has a seven-character couplet in relief, a technique referred to in Japanese as yukibori, which in jade is an extremely difficult and time consuming skill.

The exhibition will be on display at Marchant’s gallery:
120 Kensington Church Street, W8 4BH 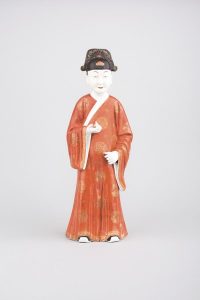 Marchant are pleased to be exhibiting at Art Antiques London from 12th - 18th June 2014. It is situated on the Albert Memorial West Lawn (opposite the Royal Albert Hall). We will... 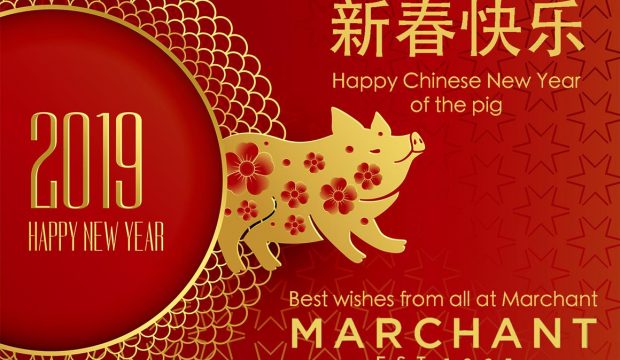 Wishing you a happy, healthy and prosperous year of the pig from all at Marchant! 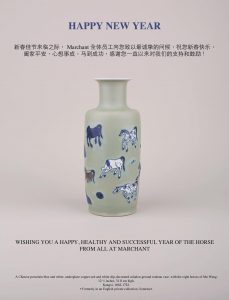 Wishing you a happy, healthy and successful year of the horse from all at Marchant.