At the conclusion of the Wanli period, the Ming dynasty was waning and the Imperial Court was low on finances, which led to very few orders for the kilns at Jingdezhen. Therefore, Chinese potters and production kilns were looking for new markets in which to sell porcelain. Japan, unable to make porcelain until the Chongzhen period, placed orders with the Chinese kilns for porcelain that was inspired by Japanese Oribe wares. This porcelain, described as kosometsuke, can be dated between 1621-1645.

Due to the lack of Imperial patronage, a new sense of freedom of expression was embraced and one cannot fail to see the powerful creative imagination with this group of wares, particularly with depictions of landscapes and animals and the previously unseen forms in porcelain.

These pieces were quite specific in their features and characteristics; they often had sand or grit on the foot rims and sometimes on the front. They had thick bodies and a thick glaze that often didn’t adhere well to the biscuit. Collectors and experts in the tea ceremony appreciated these features and the Japanese coined the term mushikui, literally translated as ‘earth worm nibbles’. The technical amendments were made after Tianqi (1621-1627) period, whereby the potters knife-cut the rims and dressed them with a brown slip.

A sparse amount of Kosometsuke is found within western museum collections today as it was bought by the Japanese and was considered prized possessions. Therefore, a majority of the objects remained in the Far East. In recent years, Museums have begun to realise the significance of these pieces and have chosen to purchase examples in order to display them in both China and the West.

Kosometsuke pieces are part of the Chinese heritage. These pieces were made in Jingdezhen for export to Japan and therefore are important to Chinese trading history. Although these objects are different from the fine imperial pieces we see being sold for high prices today, Kosometsuke is very relevant and should be viewed and appreciated for its strength of design, the historical significance it represents and its unique expressive qualities – it is an inspiration for much of modern pottery.

There is currently a great opportunity to buy rare examples of Kosometsuke at affordable prices.

A Chinese porcelain sweetmeat dish in the form of twin fish on three circular feet, the details rendered with lines and wash, the underside moulded and painted to reveal the features and enriched with fukizumi.

*A set of 5 similar twin fish dishes, in the Itsu-o Fine Arts Museum Collection, Japan, are illustrated by Masahiko Kawahara in Ko-sometsuke, Colour Section (Kyoto Shoin Co. Ltd, 1977, Japan), no.739, p.194.
*A single similar example is illustrated by Senju Sato, the founder of the Sekido Museum of Art, and Takeshi Murayama in Kosometsuke (Kyuryudou, 1969, Japan) p.135.
*A further example is published by Marchant in Transitional Wares for the Japanese and Domestic Markets, 1989, no. 11 p. 17
* Twin fish symbolise marital harmony.

Marchant are pleased to be exhibiting at Art Antiques London from 12th - 18th June 2014. It is situated on the Albert Memorial West Lawn (opposite the Royal Albert Hall). We will... 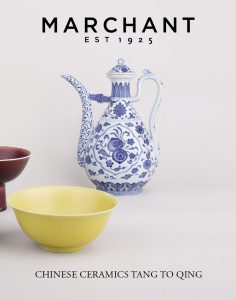 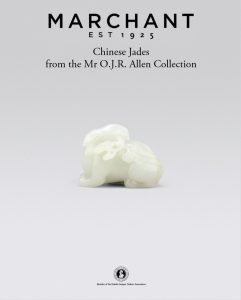 Coinciding with Asian Art Week in London, Marchant are delighted to announce the exhibition and sale of the private collection of Mr O.J.R. Allen, comprising of 36 jade animal...